Once before I was blessed with taking part in a grand and exciting project.
Realising the work of a great architect as part of a team of makers! Project of great artistic value, renowned architect of the turn of the century, team of very skilful crafts people … It was around when Charles Rennie Mackintosh’s The House for an Art Lover was built in Glasgow.

But even then, some components were missing to make it a completely blissful project… there was no patron and very little instructions from the said architect. Difficult decisions were made, like painting over a completed frieze never knowing if the said architect who have wanted that. Experts were deciding but no  patron there to decide what would be acceptable for their great house.

Several times after that, I worked on re-creations of stencilled schemes for some of the great exhibitions, The Charles Rennie Mackintosh retrospective and the George Walton retrospective both in Glasgow, but even then, while more information was available and the schemes were based on existing work made for clients there was still something missing… still no patron… Just visitors; they would come… admire very briefly the work realised which then would be dismantled. And every time I longed the rapport with the client, the admirer who was so keen on the architect/designer’s work that he/she had decided to make it happen and be happy with it ever after. The discussion on how to interpret the instructions of the master…

Ault Wharrie is another story, built in 1903 after George Walton’s design, this building has pleased and marvelled a client already, its first owner . Someone who has admired the architect/designer enough to invest time, money and energy to have it built and lived in it. This time the story repeats itself and the building has a new owner, a new patron, a couple so enthuse about the work of the architect/designer that they have decided to invest a huge amount of time and resources into getting it back in its original condition. Bill Carman, Celia Aitken and their children are so taken by the work of George Walton that they have researched, funded and worked hard at putting together a team of makers so to allow the rebirth of this wonderful building. It is history repeating itself, a truly wonderful thing. Walton would be proud of us all.

The best part is that I have been blessed enough to be asked to be part of the team and this time, it feels complete. Architect, design, patron, makers all the components are there. 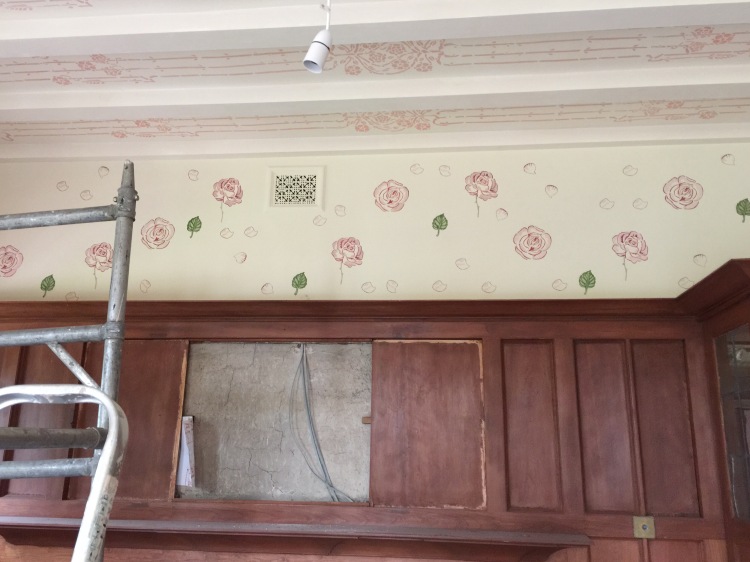 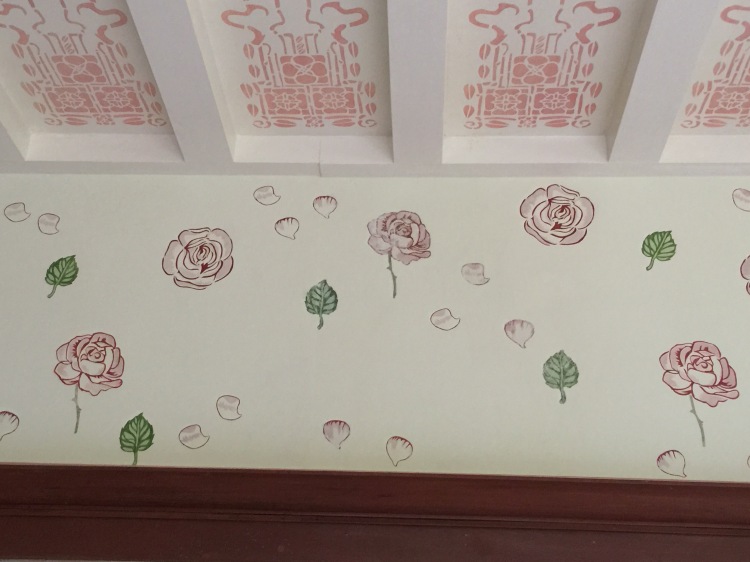 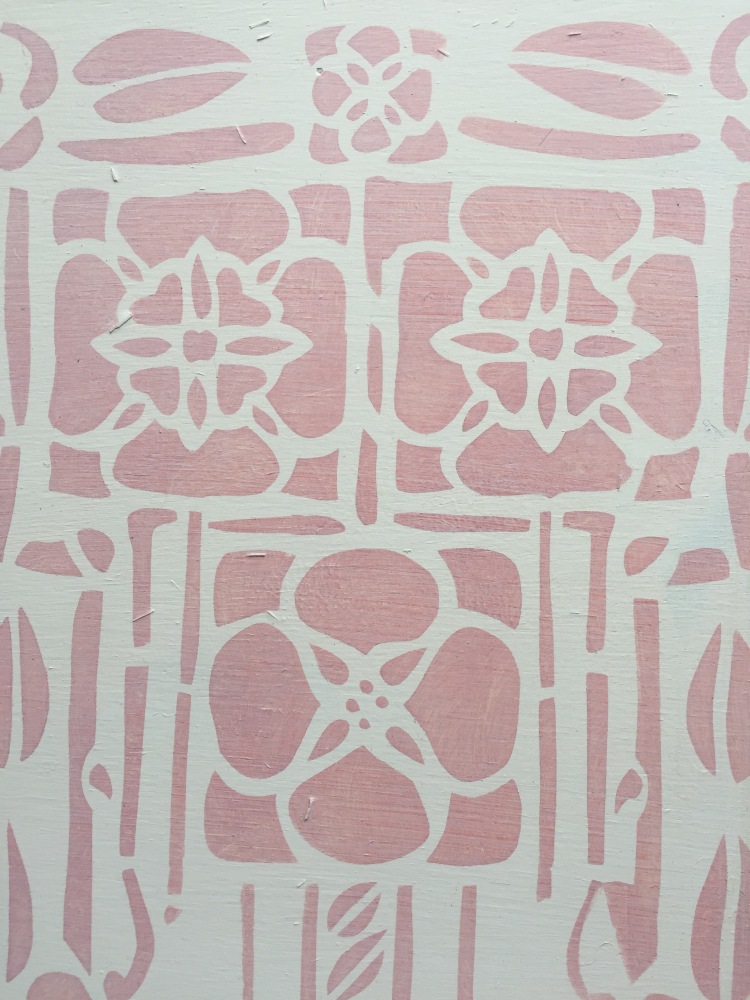 George Walton highlighted the crucial importance of the role of the skillful craftsmen in the realisation of the architect’s design during his career and wether this influenced Bill and Celia in their quest to make sure Ault Wharrie was put back to its original grandeur is not certain but I can confirm that they have been relentless in their search for any elements and people to help in the remaking. From the right architect firm who would understand traditional early 20th century buildings to the skilful wood worker who can return the old wood panneling back to its original beauty. Painters, Restaurers, Stenciller, Metal worker, Stain glass artist, have been found sometimes after great effort and long research. They have been enrolled into this quest for the perfect recreation of what was in 1903 a superbe private commission by the young George Walton and his team of craftsmen.

My role is to re-create some of the stencilled schemes. Those are the first who vanish in any historic building. The fashion changes quickly and well… what gave the owner a lot of pleasure yesterday just gets painted over as soon as it runs out of fashion and that is usually quite fast. We think that because those buildings were built over 100 years ago the owners protected their interiors but in fact just as today fashion in interior design were very short lived and any frieze, tile, wall painting did not live for very long. My job is to research the signs and use the elements made available by the restorers to re-create yesterday’s frieze with today’s findings. 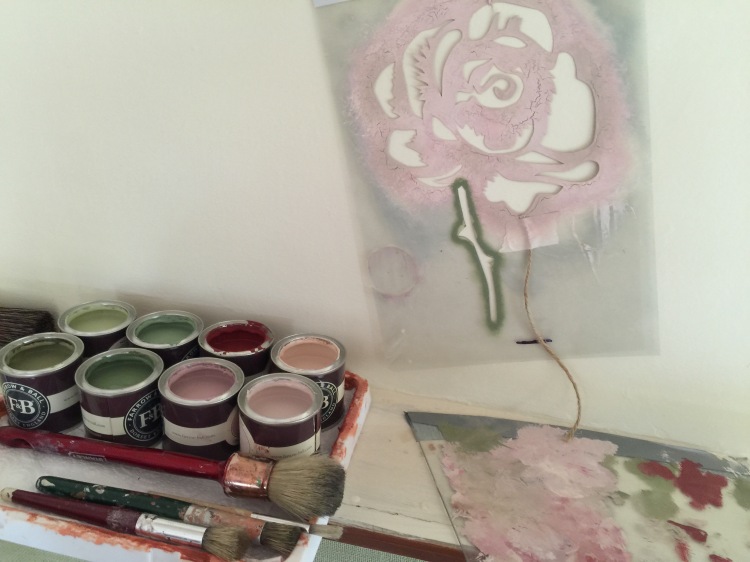 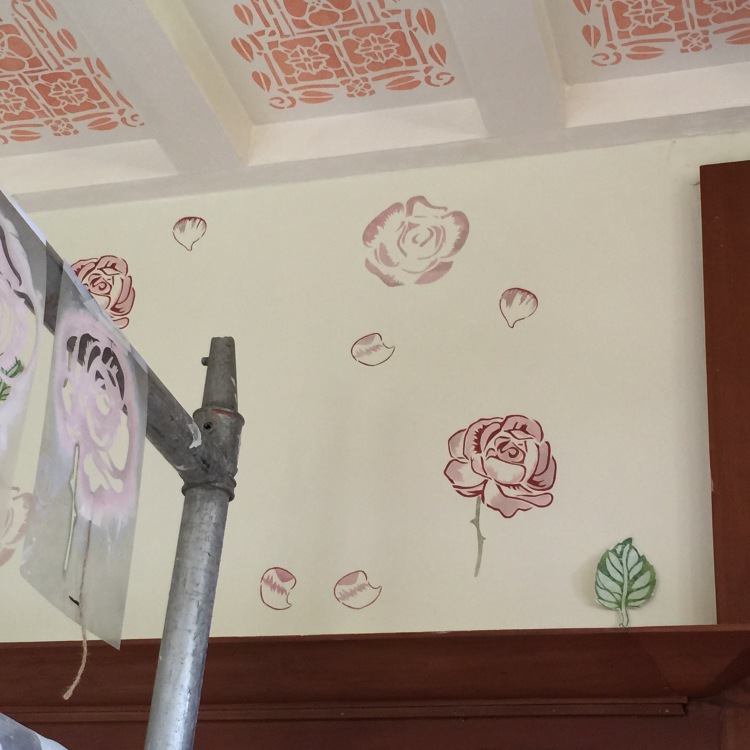 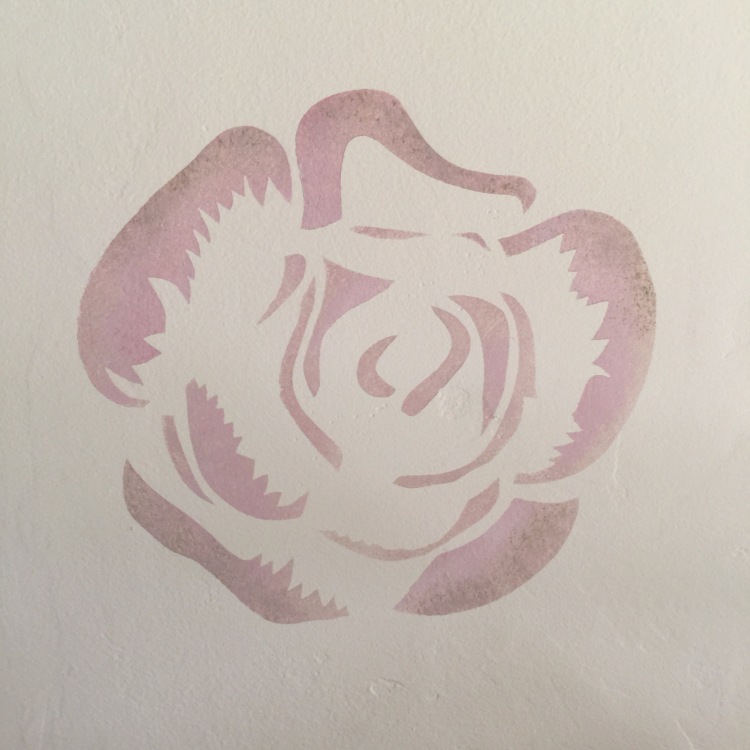 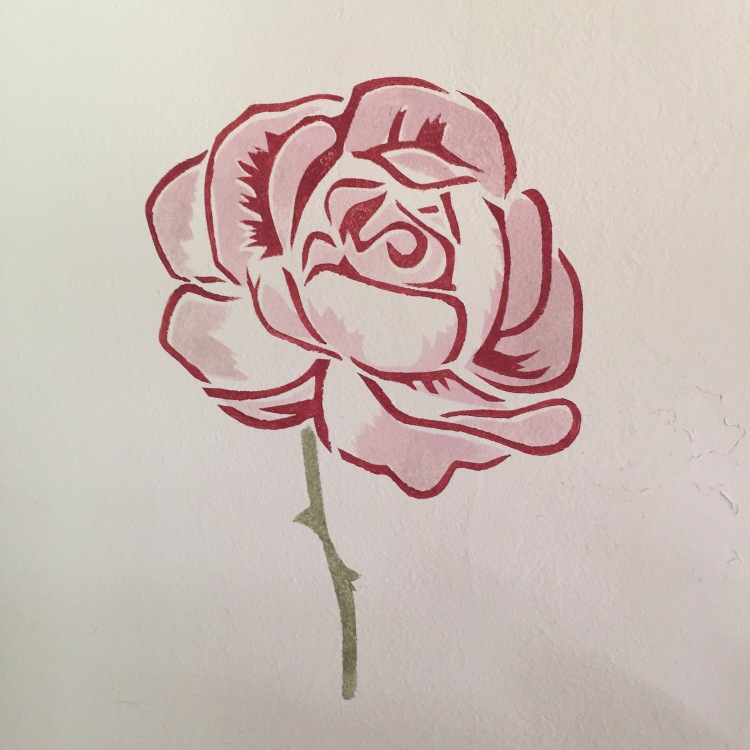 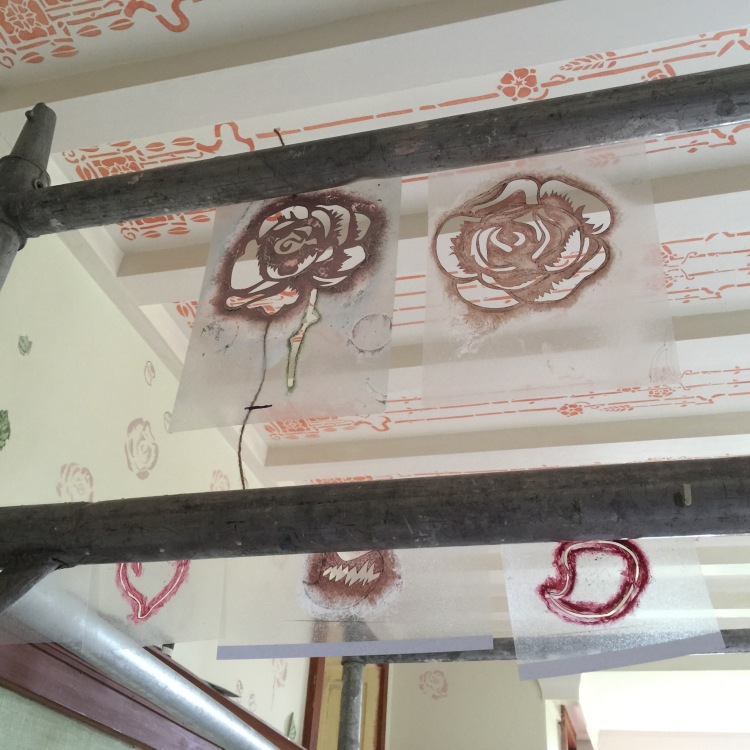 Its not just artistic and indeed the process of applying the paint on the wall is a very small part of the job at hand. When recreating the stencilled frieze on the ceiling at Ault Wharrie my hardest task was to get the stencil plate to stick on the ceiling… gravity being there to make my last very difficult. But it is so rewarding to see the job complete knowing the client will be looking at this frieze for the years to come.

My very favourite  room at Ault Wharrie is the seating room on the side of the house. Just around from the old Billiard Room this is a room full of lightness with walls lined of an almond green hessian wall paper and decorated above the picture rail and on the ceiling with the most exquisite stencilled roses. But the ceiling is just so very magical. To restore this room though we had to put some serious team-work together… Restorers to uncover some traces of yesterday… A wood specialist to restore the panelling to their original splendour, A glass man to rebuilt windows like only Victorians could put together, myself off course to re-create the stencilled scheme. A client to sponsor the lot. The end result is magical.

But that was yesterday… I am moving upstairs to the master bedroom where I will be using a great design from one of Miss Cranston’s tea room design in Glasgow.


I have to pinch myself regularly to make sure I don’t wake up in a dream. This project has something of a surreal quality.