“There is a great deal to be learned from the craftsman who intelligently executes one’s own designs… he is as much as a necessity in producing a beautiful piece of work as the designer himself.”

I have described recently in an article I wrote for The Charles Rennie Mackintosh Society Journal (Nr 100) the complicated but enjoyable process of the refurbishment of Ault Wharrie. You can get a copy of the Journal from the Society directly, they are based in Glasgow in the most stunning and only church that Charles Rennie Mackintosh designed… Queen’s Cross Church. In the Maryhill area of Glasgow its a great place to visit. The stylish red sandstone building with its deep blue stained glass stands on the corner of Maryhill and Garscube roads like the tower of a chess game. If you cant make it there, you can order it online from the website of the society or you could just become a member and get it free


The Mackintosh Society is a charity and it looks after the Mackintosh Heritage. It has members all over the world and organises events as well as look after buildings and heritage. I had the pleasure of working for them when I first moved in Glasgow many decades ago.
Recently I was asked to recreate stencilled schemes as part of the restoration of Ault Wharrie an A-listed property built between 1899-1901 in Dunblane, Perthshire. The house was designed by architects Fred Rowntree, and George Walton – a direct contemporary of Charles Rennie Mackintosh. Walton design a good deal of stencilled schemes for Ault Wharrie, some of them could be conserved but for some others I had to recreate them from scratch. Left unoccupied for many years, Ault Wharrie was in need of both substantial structural and interior repair work before it could become a home for its new owners.

Bill Carman and Celia Atkins purchased Ault Wharrie in March 2013, and immediately began researching its history. With endless determination and resources, they have been reinstating the house to its original state using the best makers and crafts people around to recreate the schemes. The lack of surviving archival material made things difficult.

I have described the process of the refurbishment In a previous post It was a great experience but all along we had this recurring question : “What would have George thought” ? would he have been happy with our approach? Would he have liked this shade of green? this shape of leaf? Would he have come up the scaffold himself as he was known to do to correct a detail?

It is a great relief for historian when the first owner of a grand house showed signs of vanity by publishing many articles about their new beautiful property in well known magazines of the time. I remember the magic of “discovering” hidden elements during the refurbishment of a turn of the century Glasgow mansion. We had access to a 100 years old published article describing the set of “hand painted tiles” or the “marble fire place” and it was like taking part in a grown up treasure hunt trying to find as many as possible of the elements described in the Journal.

But in the case of Ault Wharrie … nothing… no memories, nor write up. Just a lot of guess work and a very few black and white photos in some old books.

So we have for the almost the past two years worked hard, questioned one another and put together as much as we could of Ault Wharrie and we do think at the end of the day … Walton would be proud of our common effort and enthusiasm.

The house is close to completion and I hope the new owners will open it to the public from time to time. Its a marvelous space and in the refurbishment we have managed to capture the “Arts and Crafts” feel of the original scheme. I will be stencilling my last piece in it next week. A “rug” in the dining to tie in the stain glass door panels recently recreated by Linda Cannon with my stencilled frieze above the wood paneling and the luscious curtains made by The Glasgow Guild . 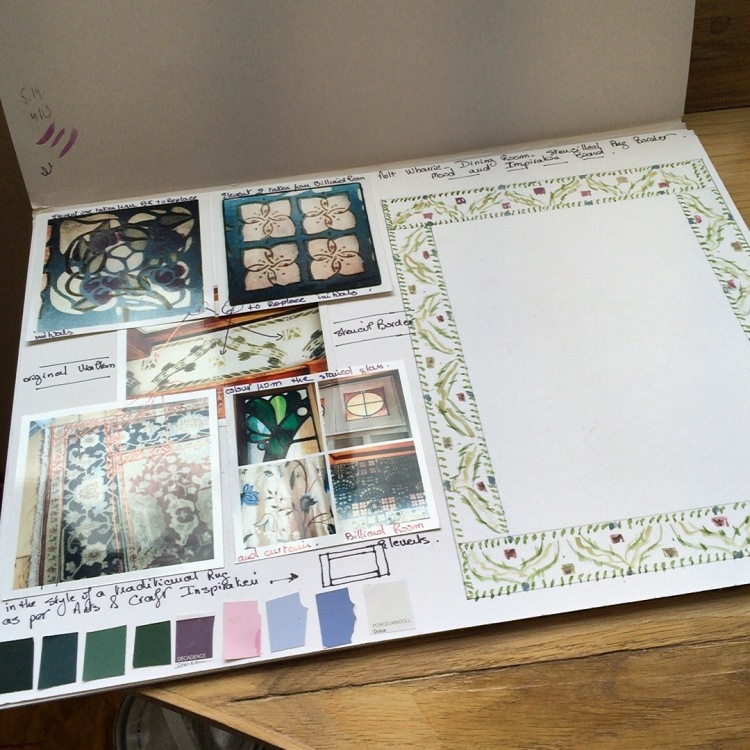 But I am looking forward to completing this task to see the house in its complete state. Its been long coming and the new owners are well due a resting time by the fire contemplating their achievement.